The fishing season at Chime lodge started in November with great conditions. We used mostly black and green sculpins and buggers. Since water levels were high, sinking lines and streamers on 6- and 7-weight rods were a must. And we hooked plenty of brown trout in 18- to 22-inch range.

By January and February the weather turned hot, water levels dropped, and guests had great fishing—particularly early in the morning and late in the afternoons. We used mayfly and caddis dries, and nymphs such us copper Johns, pheasant tails, and princes. During hot afternoon we broke out the big flies and had success with fat alberts, spiders, and hoppers… to name a few.

March was also a great month. It’s always nice to say goodbye to a season with fantastic fishing. At the beginning, smaller mayflies out-produced the foam terrestrials. Then we went back to streamers at the end of the month.

All in all, it was a great season at Chime and we look forward to another great one soon.

Hope to see you then! 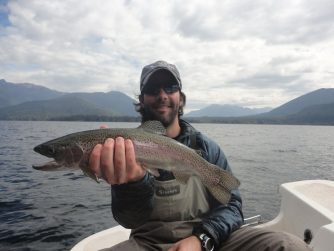